Earlier this week, the BDN released a story detailing the wind power dispute occurring in the Moosehead Lake region.

Last Friday, the Maine Department of Transportation removed roadside signs in Greenville and Rockwood that oppose the SunEdison and Everpower industrial wind power projects proposed for the region.

Maine DOT officials took down roughly 35 signs in the area that read: “Save Moosehead. Say No To Wind.” Maine DOT spokesman Ted Talbot told the BDN that the DOT had to take down the signs because the wind power projects are not on the ballot for this election cycle, and that under the Maine Traveler Information Services Act, signs relating to issues that are not on the ballot must be more than 33 feet away from the centerline of the road.

Most of the signs distributed by the Moosehead Region Futures Committee were only 20 feet away from the centerline of the road, according to the Maine DOT.

The controversy, as posed by the Moosehead Region Futures Committee, is that other signs concerning non-ballot issues, including signs opposing the East-West Highway proposal, weren’t removed by the Maine DOT, despite being placed within 33 feet of the centerline as well. The non-profit feels their freedom of speech has been obstructed simply because they oppose the wind projects.

Everyone can agree that as Mainers, and as Americans, we must move towards more sustainable, renewable energy practices. Windmills are certainly safer for the environment than the burning of fossil fuels.

However, there is much debate on the effects of windmills, both on humans and the natural environment. There is speculation on whether or not what is referred to as “windmill syndrome” actually exists, as well as what impact windmills have on species native to the areas where these projects have been completed.

One thing is for certain though – there are some Mainers who own land in scenic areas of our state that disapprove of these projects because they destroy the character and natural beauty of our state. Equally, these Mainers don’t appreciate the interest outside industries have taken in developing some of the most protected areas of our state. 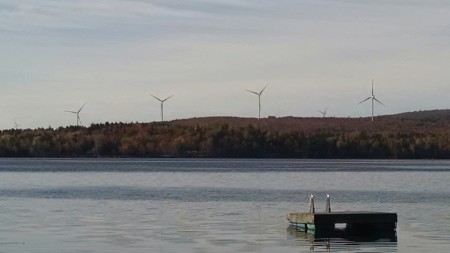 I took this picture just a few weeks ago while visiting a friend who was on his honeymoon at a family owned camp on Drews Lake, or Meduxnekeag Lake, in New Limerick. The picture shows the beautiful scenery of the surrounding area littered with turbines that were recently installed in neighboring Oakfield. My friend, Ethan Carver, is a Specialist in the U.S. Army, and returned to camp on his honeymoon for the first time since enlisting in the Army three years ago.

Carver and his family are upset with the construction of the Oakfield project, and believe that these turbines take away from the character of the landscape that they have adored in generations of owning the property.

It’s understandable how business owners in the Moosehead Lake region fear the same sentiment could be felt if these windmills were to go up in their communities. Thousands of people travel to Moosehead Lake and the surrounding areas each year to observe the natural beauty of the region. There is no doubt that the development of these wind power projects could potentially deter tourists from spending time, and most importantly money, in the area.

Local businesses in the Moosehead Region are dependent on the money tourists spend in their communities. Wind projects like the SunEdison and Everpower proposals could force some local shops out of businesses if these projects are approved.  While outsiders may feel that Maine is an ideal place to construct industrial wind farms, they will have to battle local Mainers for the right to develop.

Jacob Posik, of Turner, is the editor of The Maine Wire, an online news and opinion service offered by the Maine Heritage Policy Center. His blog covers local and national political topics.

Notes from a Corner of the Country

Notes from a Corner of the Country

He Said It Right

Infrastructure funding will determine whether Maine is not Washington

Infrastructure funding will determine whether Maine is not Washington

Why are we so afraid of speech?

Why are we so afraid of speech?

The accidental endorsement from The New York Times

The accidental endorsement from The New York Times

This blog has been archived

This blog has been archived and is no longer being updated.